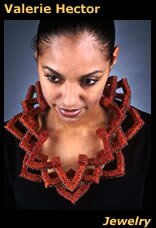 Valerie Hector is a beadwork jeweler who has been exhibiting her designs at juried American art fairs since 1988. Her early designs were concerned as much with form as with color. Lately, Valerie has been far more interested in form than in color. At the same time, she has narrowed the range of beadweaving techniques she uses from eight or nine to just two: volumetric right angle weave and tubular peyote stitch. Her work, which has been published widely over the years, has been praised for its “artistic integrity” and “disciplined technical mastery,” and she continues to be an innovator in her field.*

For inspiration, Valerie looks to the beadwork of other times and other cultures, particularly the cultures of Central, South, South East, East and Pacific Asia. Since 1981, she has been collecting and researching beaded textiles made in these regions. In 1995, she compiled the first illustrated survey of Asian beading traditions, entitled “Prosperity, Reverence and Protection: An Introduction to Asian Beadwork” which was published in Beads: The Journal of the Society of Bead Researchers, Vol. 7 (1995), 1997, p. 3-36.

Valerie is a frequent lecturer on various aspects of beadwork history. She will be the keynote speaker at Bead Expo 2004 in Santa Fe, March 2004, presenting a slide lecture on beadwork composed of organic bead materials such as bone, coral, insect shells, and wood.

Valerie’s book, The Art of Beadwork, will be published in Fall 2004 by Watson-Guptill Publications of New York City. Part global history, part contemporary how-to, The Art of Beadwork features dozens of beadwork masterpieces past and present, and tips from leading American and European beadworkers on how they create their designs.

No comments to show.